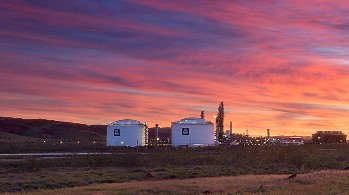 Production started in April 2006, and the first export shipment was made from the Port of Dampier in June 2006.

The YPFPL liquid ammonia plant was the first industrial development to be established on the Burrup Peninsula following the State Government's $200m infrastructure investment, and represents one of the largest ammonia production facilities in the world.

Yara Pilbara Fertilisers Pty Ltd is one of the world's largest ammonia production facilities, with a production capability of approximately 850,000 metric tons annually. The plant provides employment for approximately 100 production and administrative staff.

Liquid ammonia is a vital raw material in the manufacture of fertiliser. Output from the plant is distributed within the Australian domestic market as well as exported into Korea, Indonesia and other SE Asian markets.

The ammonia manufactured at the liquid ammonia plant is delivered via pipeline to the new jetty at the Port of Dampier and is then transported by Yara’s dedicated ammonia shipping fleet.